Beloit Public Library is host to the Wisconsin “I Am Not Invisible” (IANI) exhibit through the month of November. 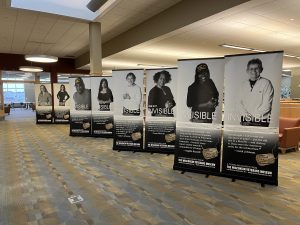 This unique educational exhibit, on loan from the Wisconsin Veterans Museum, features 16 banners that highlight the military service of Wisconsin women veterans.

Gov. Tony Evers unveiled the original exhibit during a formal ceremony at the Wisconsin State Capitol in late 2019, just before the pandemic.

“Women military veterans deserve equal recognition for the bravery and sacrifice they have demonstrated in their service to our country,” Gov. Evers said. “This exhibit not only showcases the diversity in Wisconsin’s women veterans, but it also highlights the unique stories many of them experienced in the military and afterward.”

There are about 30,000 women veterans living in Wisconsin, or about 12 percent of the state’s veteran population. Several states participate in the IANI project, which was initiated by the Oregon Department of Veterans Affairs in February 2017 as a way to increase awareness and dialogue about women veterans.

Wisconsin’s IANI exhibit is a result of a partnership with the U.S. Department of Veterans Affairs’ Center for Women Veterans and the WDVA’s Women Veterans Program.

The exhibit will be on display inside the main area of the library through November 30.