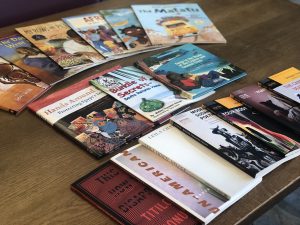 Beloit Public Library (BPL) is the recipient of a University of Wisconsin-Madison (UW) Read Africa grant.

BPL was among 34 Wisconsin libraries to receive full or partial funding of their proposals from the African Studies Program at the UW, which awarded more than $20,000 total. The overall goal of the Read Africa grant competition is to enrich public library collections with new titles that will enable readers to deepen their understanding of Africa.

“We were pleased to receive so many high quality and creative proposals for the READ AFRICA program,” Associate Director of UW’s African Studies Program Aleia McCord said. “We’re thrilled to support librarians in their efforts to offer Wisconsin residents access to titles and programming that brings knowledge about the diversity of the African continent to communities across the state.“

The Water Princess by Susan Verde,
The Day Gogo Went to Vote by Elinor Batezat Sisulu,
My Rows and Piles of Coins by Tololwa M. Mollel,
Africa is Not a Country by Margy Burns Knight and Mark McInicove,
Bintou’s Braids by Sylviane A. Diouf,
Bundle of Secrets: Savita Returns Home by Mubina Hassanali Kirmani,
Songs in the Shade of the Cashew and Coconut Trees: Lullabies and Nursery Rhymes from West Africa and the Caribbean by Nathalie Soussana,
Hands Around the Library: Protecting Egypt’s Treasured Books by Susan L. Roth and Karen Leggett Abouraya,
The Matatu by Eric Walters,
This is How We Disappear by Titilope Sonuga,
Un-American by Hafizah Geter,
Deluge by Leila Chatti,
Modern Sudanese Poetry: An Anthology, Your Body is War by Mahtem Shiferraw,
‘Mamaseko by Thabile Makue, and
The Careless Seamstress by Tjawangwa Dema.­

Libraries were encouraged to select books from two different lists. The first list, the African Books List, was curated by Ainehi Edoro-Glines, assistant professor of English and African Cultural Studies, and Vincent Ogoti, Ph.D. candidate, African Cultural Studies. The second list comprises winners of the Children’s Africana Book Awards (CABA). Since 1991, Africa Access and the Outreach Council of the African Studies Association, in partnership with the Center for African Studies at Howard University, have presented this annual award to authors and illustrators of the best children’s and young adult books about Africa in an effort to promote accurate and balanced perspectives about the continent.